Why Use a Baitcast Reel?

This Black Max Reel Review and numerous expert anglers have demonstrated that a baitcast reel is most effective for catching larger species of fish and is the type of fishing equipment that you would use once you have graduated from the level of beginner to intermediate. Prior to purchasing a baitcast fishing reel, make sure you are aware of the following information: Compared to other types of reels, such as spincast reels, baitcaster reels have a number of significant advantages, including the ability to use heavier lines in conjunction with heavier lures and the ability to fish in areas where larger game can be caught. If you don’t have them properly tuned, they can be difficult to use.

In the event that you don’t know exactly what you’re doing, they may react negatively, causing you problems. Learn where to use baitcast reels and how to use them correctly and efficiently by following along with me as I walk you through the casting procedure step-by-step.

One of the most convenient aspects of baitcasting reels is that they are designed to fit comfortably in the palm of your hand…. Many times, this provides you with additional leverage, and it also provides you with the opportunity to work baits a little bit more efficiently. This is one of the reasons why many anglers prefer this method on professional tours. Furthermore, the line that this fishing reel is capable of handling is significantly thicker.

Using a 17-pound-test line with no issues on a baitcasting reel, on the other hand, would necessitate the use of a spinning reel with a much larger diameter in order for it to handle the same line. There are some baitcasting rods that are heavier and longer than the spinning rods that come with them, and this is due to the fact that baitcasting reels are designed to cast bait.

This means that the angler will be able to cast heavier baits, such as large spinnerbaits or large jigs, further. When we take all of this into consideration, we can see that baitcasting reels have a distinct physical advantage right off the bat.

The anatomy of a baitcasting reel

The spool release mechanism is one of the most important components of a baitcasting reel. The spool is released and will begin to revolve as soon as the thumb is pressed against it. It can be engaged or disengaged by turning the handle or the crank. The drag system is an additional component of the reel that must be considered. This is frequently controlled by a handle in the shape of a star.

You can move this star forward or backward by applying more or less force to it, thereby altering the amount of drag that you experience. Any angler must also pay close attention to the spool adjustment cap, which is located just behind the handle and is a critical component. By turning it and tightening it, it applies pressure to the spool and can cause it to slow down, reducing the likelihood of backlash.

Centrifugal brakes are the final and most important component of this type of reel. Remove the cover, which is usually done by unscrewing, but keep in mind that this may differ from model to model. Once the cover is removed, you can adjust the breaks. Centrifugal brakes, which are nothing more than a collection of small plastic cylinders that glide along metal rails, can be found within the vehicle’s interior.

In other words, when the brakes are engaged, or when the spool is spinning at a high rate, centrifugal force pushes the small plastic pieces against a drum that surrounds the mechanism, causing them to break. The spooling process is slowed as a result of this.

There are a total of 6 brakes, which are arranged in a circular pattern, and you have the option of activating as many as you want by pulling on the previously described plastic pieces. The brakes have two distinct positions, and when they are activated or deactivated, you can feel the brakes click into place as they are applied.

Reasons to use a baitcasting reel

When anglers attempt to use a baitcasting reel for the first time, they may experience extreme frustration and annoyance. You will quickly understand why so many anglers prefer this type of fishing reel, however, once you learn the proper procedures to follow when casting your line. At first, baitcasting reels were only used in saltwater fishing to catch large game such as marlin, and they were expensive.

Later, anglers began using these reels on lakes as well, in order to catch large fish such as bass or other species of large fish. A baitcasting reel requires a slightly different approach to fishing than other types of reels, which makes it a little more difficult to master. 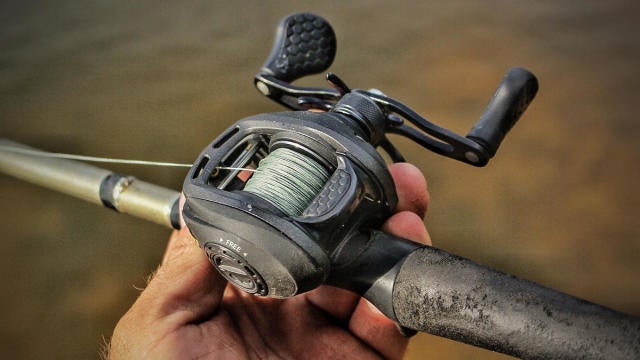 These reels are mounted on the end of the pole, and the primary reason that anglers should have some prior experience with them is that you must use your thumb to control both the coil and the arrangement of the bait.

Backlash is more likely to occur if your spool adjustment is not perfect, which is something that many beginners fail to do correctly. This means that your spool will continue to spin even after the line has been drawn out of the coil and is no longer needed. This results in a tangled mess on your coil, which is why this issue is sometimes referred to as a bird’s nest problem.

Because baitcasting reels are larger in size, they can accommodate larger lines and more massive baits, which increases the likelihood of catching larger game. It is possible to fish at high speeds with heavier bait if you use heavier bait, and by taking advantage of heavy-duty lines, you can exert greater pressure on the line without fear of it snapping.

It is common for anglers to be required to place their bait in an exact location when fishing for bass. This fishing equipment gives you the ability to do exactly that. As a result, your chances of catching that fish are significantly higher because you have much greater control over where your bait is placed. Furthermore, once the fish is on the hook, the close position of the reel on the pole provides you with more leverage when reeling in the fish.

Regardless of whether or not you have ever fished with a baitcasting reel, the possibility of becoming a professional angler always exists. Keep in mind, however, that a complete angler, particularly a deep-sea angler, will always have this type of reel in his or her arsenal of tackle. If you are fishing for sailfish, bass, tuna, or marlin, especially in rough waters, a baitcasting reel is a must-have piece of equipment.