Fishing is a fun activity that can be very rewarding provided that you use the right equipment, you can find more info here. Fishing is a way of procuring food that people have used for thousands of years. Back then, people used to fish by using their bare hands, they used to train other animals to catch the fish or they would use spears.

Fishing is one of those few activities that the entire world shares. As expected, people started fishing as a way to procure food. However, as the world evolved and new means of catching fish were developed, angling has also become a hobby that numerous people enjoy in their free time as a way to relax. But, when and where did it all start? From survival to commence

Archaeological excavations have revealed that Homo erectus discovered fishing approximately 500 000 years ago, and that it was a successful activity. Scientists, on the other hand, have argued that fishing most likely developed during what we now refer to as the Upper Paleolithic period, which occurred between 40 000 and 10 000 years BCE. Even if we are aware of these facts, there are still some questions when it comes to evaluating the fishing practices that our forefathers used to practice.

The majority of the time, humans used to catch fish by hand or with the help of tools made of natural materials back then. As a result, these rudimentary tools have been completely phased out of existence since then. In Egypt, around 3500 BCE, the rod, the net, and the spear were all invented and put to use for the very first time.

It appears that the Romans were major traders and consumers of fish during their time. For catching the fish that they sold, the Romans used a variety of nets that were both large and small. Those parts of the fish that were not consumed immediately were fermented and turned into garum, a highly flavorful condiment that is still used today.

The trading of fish carried on throughout the Middle Ages. Feudal lords used to impose strict rules on who was allowed to fish in lakes and rivers, and who wasn’t. With the invention of man-made ponds in the middle of the 11th century, people began to engage in the practice of fishing.

Furthermore, beginning in the 15th century, the fish trade experienced a significant expansion. For example, the Dutch were well-known for employing fleets of herring drifters when fishing, with some of these vessels remaining at sea for several weeks at a time. Ventjagers, or cargo boats, were used to transport the necessary food and water supplies to the fishing boats. The ventjagers were also tasked with the responsibility of bringing the catch back to port.

The first trawlers were built in Great Britain in the 17th century, and they were soon put to use for commercial fishing operations there. However, it wasn’t until the invention of the steam engine in the nineteenth century that these boats became widely used extensively.

The use of steam power provided the impetus for the construction of larger and better boats, which were used for fishing in deeper waters at that time. As a result, the seafood trade grew exponentially, and Grimsby, a small town in Yorkshire, rose to become one of the most important ports in Europe.

In the 18th century, recreational fishing as we know it today was first introduced to the public and was initially restricted to the upper classes. This type of fishing became increasingly accessible to people from all walks of life as technology progressed and angling equipment became more inexpensively produced.

Cormorant fishing is a style of fishing common in countries such as Japan and China. As the name suggests, it involves the use of trained cormorants, a species of birds that are known to dive into the water to catch fish.

To prevent the birds from eating the fish that they capture, they have wire around their throats. This method used to be utilized widely, but it is nowadays rarely employed.

This ingenious method is also now obsolete. A long time ago, people used to go to a small town in Scotland called Palnackie to take part in what was known as flounder trampling.

Once gathered, the crowd of people used to trap flatfish in the muddy water by using their feet by standing on them. Once a participant had caught a fish, he/she would use a trident-like tool to kill it. The technique was somewhat popular in Scotland.

However, in recent years, people do not use it anymore, as numerous animal rights organizations have criticized it and called it cruel. Yet, on the first Saturday of each August, Palnackie is still home to the World Flounder Tramping Championships, an event that is still popular in the community. As expected, many organizations have tried to ban it.

The Bajau people are an ethnic group known for living almost exclusively on the rich waters of Indonesia, Malaysia, and the Philippines. Because of their unusual lifestyle, they are called sea nomads. They live in houses that are built over coral reefs and they have a close familiarity with the ocean.

What makes them stand out from other ethnic groups is the fact that they are exquisite deep-sea fishers. Most of them spend up to five hours in the water per day, using a traditional fishing technique to procure food for their families: they hunt for fish using spearguns and spears. They can hold their breath underwater for up to 13 minutes, without having to use breathing apparatuses.

The first records of spearfishing date back to 16,000 years ago. The method itself was described in numerous religious texts. Differently from the method used by the Bajau people, spearfishing refers solely to the action of throwing spears into the water, and not actually diving into it and hunting the fish.

Even though many might consider it cruel, this method is still used in the Bahamas as well as in the states around the Gulf or Mexico.

If you are a fan of Shakespeare, you’ve probably heard about trout tickling before. Trout tickling consists of, as the name suggests, rubbing the underbelly of the fish by using one’s fingers.

When the technique is used correctly, the trout falls into a trance-like state and the angler can pick it up and place it on the ground. Today, trout tickling is not very popular, and even illegal in some areas.

Not surprisingly, this innovative method of catching fish has caught the attention of writers. The method is mentioned in Halieutica, De Natura Animalium by Aelian, and even in Mark Twain’s works.

Otters have been trained to catch fish since the 6th century and it is still used today in Bangladesh. This method was popular in the northern part of Africa, in Ventral Europe, Scandinavia, and Asia.

Even if otters seem to be nice animals, they are extremely difficult to tame. Otter fishing was mentioned in works from the Tang dynasty in China. Plus, Marco Polo has also observed people using it in the 13th century. 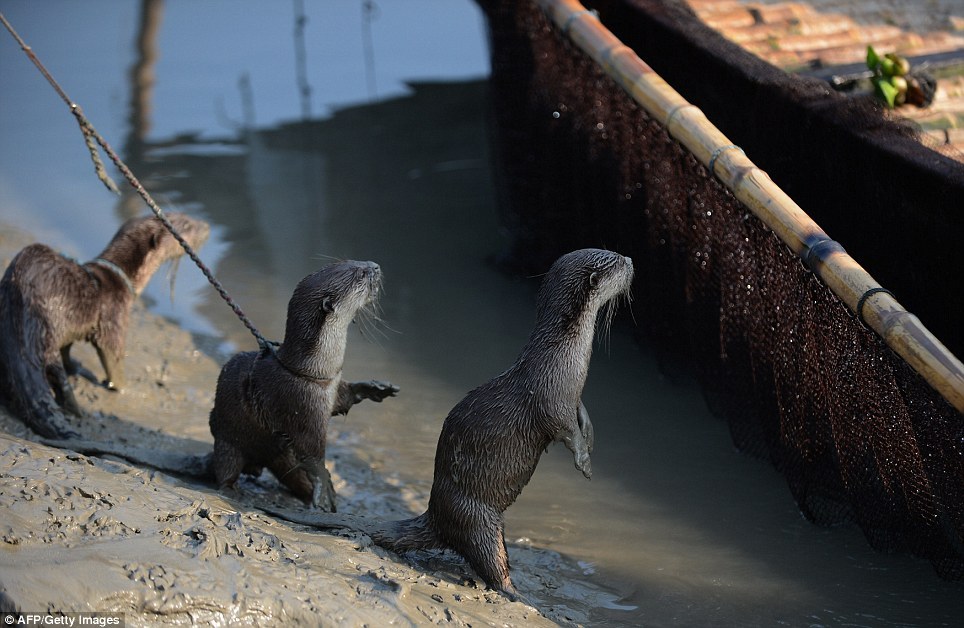 The use of hooks and baits while fishing is a very old method that also dates way back. Some argue that it was first used in the Neolithic age. Hooks used by the first fishers were discovered in Japan, in the Sakitari Cave on Okinawa Island. These hooks are estimated to be more than 22,000 years old.

The first hooks were manufactured from bones, animal horns, and shells, as well as from bird beaks. Soon, anglers discovered that they could use weights to submerge the hooks into the water.

Ice fishing was created by the people that used to live in the area of Canada and North America. It is not clearly known when the method was first used. A long time ago, ice fishing meant breaking the ice over a river or lake and placing a wooden bait shaped like a fish into the water.

When a real fish came close to the bait, people used to use spears made of ivory and bone to kill and capture it. As time passed and the art of fishing was perfected, the spears were replaced with rods, line, and hooks.

The use of nets in fishing is not a recent invention. During the times of ancient Greek, they used to make the nets from thin threads.

The nets used to be placed in areas where the fishermen knew that the catch passed through regularly, or they would throw them onto the schools of fish that were swimming in shallow waters.